Can we help you?

Through the years we have been appointed as liquidator in small and large insolvent estates at the request of banks and other creditors. Thus, we have attended to transfer or winding-up of struggling companies within a number of lines of business, such as manufacturing companies, service business, retail, farming etc.

In that connection we have a network of associated companies to carry through valuation and sale of assets or purchase of companies wholly or partially. In its capacity as liquidator and as part of the insolvency proceedings Codex Advokater has conducted legal proceedings concerning liability and avoidance.

Moreover, Codex Advokater has advised and represented banks and other creditors in connection with the proved claims for avoidance.

Codex Advokater is attached to this arrangement as general liquidator in the Court of Kolding.

Moreover, Codex Advokater has acted as creditor representative and has given advice in connection with the evaluation of proposals for reconstructions, compositions, extensions of payments or the like.

We welcome applications from prospective employees. Send your application, CV and any other relevant information to lej@codexlaw.dk 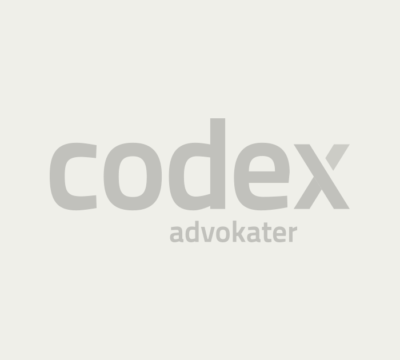 In Codex Advokater we are ready to give advice to companies and other business owners on all the facets and issues of employment law.

In Codex Advokater we can assist you in drawing up exactly the will, which fits in with your family circumstances, and which will meet your requiremen

Legal Matters of the Agricultural Sector

Mergers and Acquisitions (M&A) and Due Diligence

Purchase and Sale of Real Estate

Services of the Board

In several cases we have assisted in conversions, restructurings, mergers as well as demergers of such companies.

We provide legal services to small, medium-sized and large companies within numerous fields about their legal matters.

Local Authorities and the Public Sector

Our specialists consider all types of cases concerning divorce, marriage and children for our business customers.

The automobile industry is characterized by massive dynamics and a multitude of rules requiring special insight and expertise within the field.